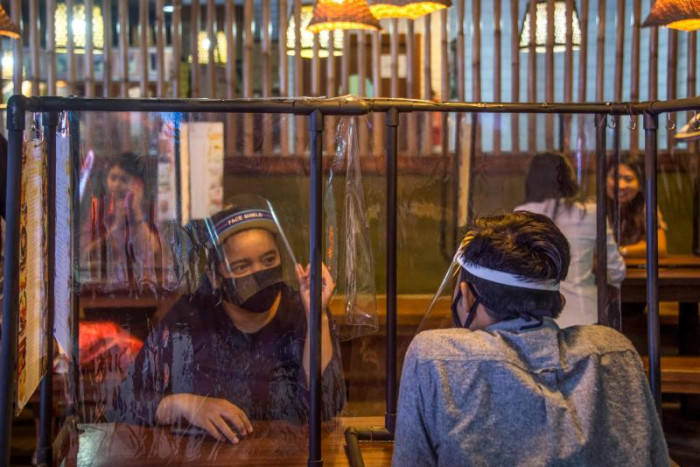 Young people sit in a restaurant with plastic dividers to apply social distancing rules amid concerns for the COVID-19 coronavirus at a shopping mall in Surabaya, East Java on Tuesday (AFP)

The number of coronavirus infections in Indonesia exceeded 40,000 with the emergence of new hot spots amid a ramp-up in testing and contact tracing to contain the pandemic.

The world’s fourth-most populous nation reported 1,106 new cases in the past 24 hours, taking the total to 40,400, official data showed Tuesday. Thirty-three people succumbed to the disease, taking the total fatalities to 2,231, the highest in Southeast Asia, according to data from Johns Hopkins University.

Indonesia is on course to overtake Singapore as the country with the most cases in Southeast Asia with South Sulawesi and South Kalimantan emerging as new hot spots in the vast archipelago. The number of infections has surged in recent weeks as authorities ramped up sample testing to meet President Joko Widodo’s target of 20,000 specimens a day.

Jokowi, as the president is popularly known, has also called for steps to prevent a second wave of infections and threatened to reimpose social distancing rules to contain the virus as regions, including capital Jakarta, began loosening mobility rules this month, allowing places of worship, offices, restaurants and retail stores to open at 50% of their capacity.

Coronavirus : People are getting sick from coronavirus spreading through the air – and that’s a big challenge for reopening