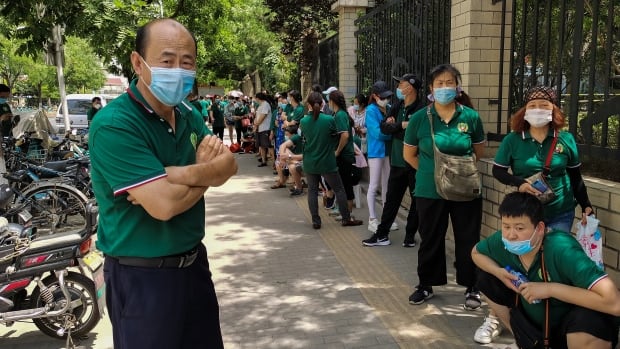 China increased testing and lockdown measures in parts of the capital Tuesday to control what appeared to be its largest coronavirus outbreak in more than two months.

The 40 new cases reported Tuesday included 27 in Beijing, bringing the city’s total to 106 since Friday.

Many of the recent cases have been linked to Beijing’s Xinfadi wholesale market and authorities have been testing market workers, anyone who visited the market in the past two weeks and anyone who came into contact with either group.

Fresh meat and seafood in the city and elsewhere in China was also being inspected on the unlikely chance that was how the virus spread.

WATCH | Clusters of infection always a cause for concern, WHO says:

Disease clusters, like the COVID-19 one in Beijing, offer a unique opportunity to understand transmission better, says the World Health Organization.   3:16

Residential communities around the market have been put under lockdown, along with the area around a second market, where three cases were confirmed. In all, 90,000 people are affected in the two neighbourhoods in the city of 20 million.

Authorities are also barring residents of areas considered at high risk from leaving Beijing, and those from such areas who have already left must report to local health bureaus as soon as possible.

Taxis and car-hailing services have been banned from taking people out of the city, and the number of passengers on buses, trains and subways will also be limited and all are required to wear masks.

More than eight million people worldwide have contracted the coronavirus since the outbreak began, according to a tally by Johns Hopkins University. As of 6:18 a.m. ET on Tuesday, the university has tallied more than 437,000 deaths from the disease it causes, COVID-19.

In Canada, the number of confirmed and presumptive coronavirus cases has surpassed 99,000, with 29,878 of them still active. A CBC News tally of deaths based on provincial data, regional health information and CBC’s reporting stood at 8,093.

Here’s a look at some of CBC’s coverage from across the country:

A global pandemic is not enough to keep Coogee the Australian labradoodle away from the seniors she loves to visit. Here’s how her owner and the recreation therapist at Sunnybrook hospital’s Veterans Centre got creative — by going virtual. 3:10

What’s happening around the world

The wife of Ukraine’s President Volodymyr Zelenskiy has been hospitalized with double-sided pneumonia after getting infected with the novel coronavirus.

Zelenskiy’s office said in a statement Tuesday that Olena Zelenska’s condition was stable and the president himself and the couple’s children tested negative for the virus on Monday.

Zelenska said she tested positive for the virus on Friday.

Ukraine’s authorities started to gradually ease lockdown restrictions in late May, resuming the operation of public transport, and reopening malls and gyms. On Monday, the country’s authorities resumed international flights to several countries.

Finland says it has lifted the emergency powers act adopted by lawmakers in mid-March to tackle the coronavirus crisis.

Finnish Prime Minister Sanna Marin said the measure to end the state of emergency, effective Tuesday, was taken as the COVID-19 infection rate has slowed down in the Nordic nation.

Marin said there was no need anymore for bigger powers for the government, and Finland would now gradually return to normal conditions.

She stressed, however, that « the end of the emergency act does not mean the threat of the epidemic is over, » and urged Finns to continue practising physical distancing and good hygiene.

Authorities in Pakistan are taking action to seal off high-risk areas in the country’s 20 biggest cities after an increase in coronavirus infections.

Pakistan’s National Command and Control Center says raids are being carried out to impose fines and shut markets, industries and shops where physical distancing regulations were being violated.

The sealing of high-risk areas began after Pakistan reported a big jump in COVID-19 deaths and a steady increase in infections.

Pakistan put its entire population of 220 million under lockdown from March until last month, when Prime Minister Imran Khan’s government loosened restrictions, saying it was necessary to save the country’s economy.

Critics say the government’s gamble resulted in a sharp increase in infections and deaths.

On Tuesday, Pakistan reported 111 new COVID-19 fatalities. It raised the overall death toll from the virus to 2,839 among 148,921 confirmed cases.

Turkey has made the wearing of face masks mandatory in five more provinces following an uptick in COVID-19 cases.

Health Minister Fahrettin Koca tweeted early Tuesday that the wearing of masks was now compulsory in 42 of Turkey’s 81 provinces.

In the remaining provinces, residents are required to wear masks on public transportation and in shops and malls, and are being advised to wear masks and keep to physical distancing practices elsewhere.

Koca tweeted: « We cannot struggle against the virus without masks. »

Turkey is seeing an upward trend in the daily number of infections after the government authorized cafés, restaurants, gyms, parks, beaches and museums to reopen, lifted inter-city travel restrictions and eased stay-at-home orders for the elderly and young at the start of June. The daily number of infections climbed to above 1,500 in the past five days after hovering around 800 to 900 previously.

Africa’s coronavirus cases are now above a quarter-million after South Africa registered a series of daily record-high new cases over the weekend.

South Africa’s struggle to balance measures to slow the spread of the virus and relieve economic pain are common throughout Africa, where the World Health Organization last week said the pandemic is now « accelerating. »

India recorded another 10,000-plus coronavirus infections as patients swamped health services in its largest cities.

The Health Ministry on Tuesday also reported a 24-hour increase of 380 deaths due to COVID-19, driving the death toll to 9,900.

The 10,667 new cases raise the nation’s total to 343,091, fourth-highest in the world behind the U.S., Brazil and Russia. The actual numbers, like elsewhere in the world, are thought to be far higher due to a number of reasons, such as limited testing.

Maharashtra, the western state that is home to Mumbai, India’s financial and entertainment capital, continues to have the highest state toll. Mumbai, Chennai and the capital New Delhi are seeing rising infections swamp their health services.

New Delhi is a growing concern, with the federal government criticizing its contact tracing and hospital capacity. The capital has about 10,000 beds dedicated to COVID-19 patients, half of which are already occupied. Hotels and sports stadiums are being considered for use as field hospitals.

Coronavirus : People are getting sick from coronavirus spreading through the air – and that’s a big challenge for reopening