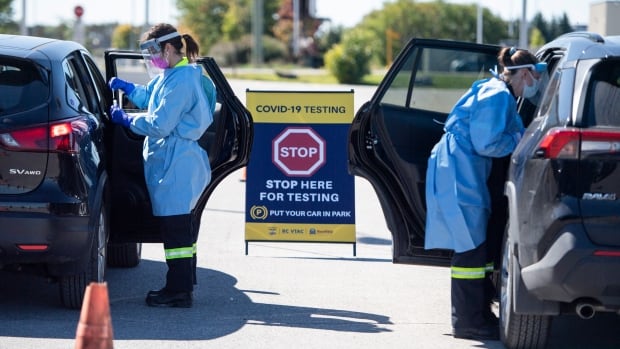 Provinces are reimposing restrictions on gatherings as health officials worry that the new increases in COVID-19 cases could lead to an equivalent spike in hospital patients or deaths in the coming weeks.

As of 11:30 a.m. ET on Monday, Canada had 144,662 confirmed or presumptive coronavirus cases. Provinces and territories listed 125,204 of those as recovered or resolved. A CBC News tally of deaths based on provincial reports, regional health information and CBC’s reporting stood at 9,258.

Over the past week, as Premier Doug Ford and his government slapped new restrictions on private gatherings, Ontario reported an average of 335 new confirmed COVID-19 infections daily. That’s triple the pace of the last week of August.

So far, the rise in hospitalizations is nowhere near as steep. There were 63 patients with confirmed cases of COVID-19 in Ontario hospitals as of Sunday. The hospitalization rate hit its low ebb in the third week of August, with a daily average of 38 patients in beds around the province.

Ontario reported an additional 425 cases of COVID-19 on Monday, the most on any single day in three and a half months.

Consistent with recent trends, the majority of new infections were concentrated in three public health units. Toronto saw 175, while Peel confirmed 84 and Ottawa 60.

However, hospitalizations and deaths are what epidemiologists call « lagging indicators » of the impact of a pandemic: you don’t see those numbers rising until well after the infections were transmitted.

Quebec’s COVID-19 situation has become so serious the province is setting its new Covid Alert system to its second highest level in several regions, including Montreal and Quebec City, just weeks after it was implemented. Officials say they have no patience for protocol breakers and warn that if people don’t co-operate, a full lockdown is next. 1:45

This comes as Ontario pediatricians say their calls for the financial and logistical support needed to do more flu vaccinations during the pandemic have so far gone unheeded and fear an « imminent crisis » lies ahead.

« Right now, Public Health seems to expect the status quo from years past, when individual doctor’s offices and scattered flu clinics gave flu vaccine, » said an online petition launched on Change.org on Saturday by the pediatrics section of the Ontario Medical Association.

Public health officials and health-care experts have stressed the importance of getting the flu shot this year to avoid burdening the health-care system even more during the pandemic.

Following Ontario in imposing renewed restrictions, residents of Montreal and Quebec City are being urged to reduce their social activities to a minimum and face a host of new restrictions as the provincial government there tries to curb a rapid increase in cases of COVID-19.

Quebec’s two largest cities, and the Chaudière-Appalaches region, which is south of Quebec City, are under « moderate alert » beginning midnight Sunday.

That is the orange, or second-highest, alert level under the province’s regional system for categorizing the danger posed by the coronavirus.

WATCH | Your questions about COVID-19 testing:

Doctors answer viewer questions about COVID-19 testing in Canada, including how effective it is and who should be tested. 4:58

Quebec reported 462 new cases of COVID-19 on Sunday and 427 new cases on Saturday. The province hasn’t seen similar daily increases since late May. Hospitalizations have been increasing at a slower rate and are now at 138, up from 124 a week ago.

The maximum number of people allowed at a private gathering has been reduced from 10 to six. If a gathering is limited to members of two different families, then it can exceed the six-person maximum.

Bars and restaurants will stop serving alcohol at 11 p.m. and will close at midnight. A maximum of six people will be allowed per table.

A maximum of 25 people will be allowed to take part in events like weddings, barbecues or religious services. In settings that involve sitting and little talking, such as movie theatres or concert halls, the current 250-person limit remains in place.

What’s happening around the rest of Canada

A student at Riverside Public School in Elmira, Ont., has tested positive for COVID-19, the Waterloo Region District School Board says.

The student was last in the building on Friday, the board said in a statement posted to its website on Sunday. The school is being cleaned, and it’s expected staff and students will be able to return on Monday morning.

The case is the third one in a school in Waterloo Region. There is also a student case at St. Anne Catholic Elementary School in Cambridge, Ont., and a staff member at Edna Staebler Public School in Waterloo tested positive for the virus.

An employee in Toronto’s parks, forestry and recreation division has tested positive for COVID-19, and a number of staff members who may have had contact with the infected person have been advised to go into isolation, a union local says.

The employee worked at Falstaff Community Centre, near Jane Street and Wilson Avenue, according to Dave Mitchell, president of the Canadian Union of Public Employees (CUPE) Local 79. The local represents about 20,000 city inside workers.

Mitchell said the employee received the positive test result on Sept. 11, and the union local was informed on Sept. 12.

Some members have told the union local that they want more information about the case, he said. There is a larger group, outside of the employee’s close contacts, who were not informed of the case by Toronto Public Health, but found out through word of mouth, he said.

Race-based data is confirming what some on the front lines of the COVID-19 pandemic have been saying for months — that the novel coronavirus affects communities of colour at a disproportionate rate.

According to early data from Ottawa Public Health (OPH), 66 per cent of people who’ve tested positive for COVID-19 in Ottawa are racialized, a term OPH is using to refer to Black people and others from non-white backgrounds.

The term does not include people who identify as Indigenous.

« We know that there are systemic inequities for these communities, » said Naini Cloutier, executive director of the Somerset West Community Health Centre, in an interview with CBC.

« With COVID, the cracks are becoming bigger and you’re seeing the very negative impact. »

Only 25 per cent of Ottawa residents identified as being a visible minority in the 2016 census, according to Statistics Canada.

What’s happening around the world

According to Johns Hopkins University, the global total of confirmed coronavirus cases stands at more than 31 million. More than 960,800 people have died, while 21.2 million have recovered.

Health officials in the United Kingdom have issued a dire warning as the number of coronavirus cases continue to increase.

According to week-old data, new cases are rising by at least 6,000 per day with hospital admissions doubling every eight days.

Chris Whitty, the government’s chief medical officer, and Patrick Vallance, its chief scientific adviser, cautioned that if left unrestricted, the epidemic would reach 50,000 new cases per day by mid-October.

« If this continued along the path … the number of deaths directly from COVID … will continue to rise, potentially on an exponential curve, » Whitty said. « That means doubling and doubling and doubling again, and you can quickly move from really quite small numbers to really very large numbers. »

Experts in the United Kingdom are issuing a dire warning about the number of COVID-19 cases in the coming months. Fifty-thousand new cases per day are possible by mid-October, leading to 200 deaths per day a month later. 2:46

The United Kingdom already has the biggest official COVID-19 death toll in Europe and the fifth largest in the world.

Meanwhile, Scotland first minister Nicola Sturgeon says there is a need to move « sharply » now to curtail the explosive growth of the coronavirus.

Scotland, Wales and Northern Ireland, plus four additional areas, have all been put under restrictions preventing people from entering those areas without a reasonable reason, such as education or work. People are also only allowed to meet those they don’t live with outdoors.

« I need to be absolutely straight with people, » Sturgeon said. « Across Scotland, additional restrictions will almost certainly be put in place … over the next couple of days. »

Scotland’s first minister, Nicola Sturgeon, says there is a need to move ‘sharply’ now to curtail the explosive growth of the coronavirus. 1:04

A total of 156 countries have joined the global COVAX scheme intended to ensure fair distribution of supplies of future vaccines against COVID-19, an alliance led by the World Health Organization (WHO) said on Monday.

The goal of COVAX is to deliver two billion vaccine doses around the world by the end of 2021, with health-care workers prioritized initially, followed by the most vulnerable 20 per cent of people in every participating country, regardless of income level.

While many lower-income nations are seeking assistance via COVAX, some richer countries had been reticent in confirming their intentions. Some of those who have secured their own future supplies through bilateral deals, including the United States, do not plan to join COVAX.

All remaining virus restrictions will be lifted across much of New Zealand from late Monday with the exception of the largest city, Auckland, which will continue to have some restrictions for at least another 16 days.

Prime Minister Jacinda Ardern made the announcement Monday after meeting with top lawmakers.

The nation of five million reimposed some restrictions last month after an Auckland outbreak, which now appears to be under control.

Lebanon registered a record 1,006 cases of COVID-19 over the past 24 hours, the government announced Sunday, amid a sharp increase in infections and deaths due to the coronavirus.

Health Minister Hamad Hassan recommended a total lockdown for two weeks to stem the alarming rise in daily detected infections, but authorities will find it difficult difficult to impose another lockdown amid an unprecedented economic collapse.

Czech Health Minister Adam Vojtech resigned on Monday following criticism of his handling of the pandemic after a surge in cases.

WATCH | Epidemiologist on people’s own power to change the course of COVID-19:

Dr. Christopher Labos says Quebecers can limit the damage from a second wave of the coronavirus by following basic health guidelines. He also paints a vivid picture of the virus’s transmission while stressing the importance of masks. 4:44

Before the start of the summer, the government lifted almost all restrictions imposed during the first wave of the pandemic. The number of infections has doubled this month and has grown at the second fastest rate in Europe in recent weeks, behind Spain.

Prime Minister Andrej Babis thanked Vojtech for his work in a Twitter message. Vojtech had been heavily criticized over the new wave of infections although some opposition politicians saw him as a scapegoat for the government.

« The prime minister is more responsible as he strongly and incompetently interferes with Health Ministry work, » Marian Jurecka, chairman of the opposition Christian Democrats, wrote on Twitter.

Greece’s government spokesperson says more than 200 people have tested positive for the coronavirus among thousands of asylum-seekers admitted to a new camp on the island of Lesbos after the old one burned down.

Speaking during a regular briefing Monday, Stelios Petsas said 7,064 people who entered the new camp at Kara Tepe had been tested, and 243 of them were found positive.

The average age of those confirmed positive was 24, and most were asymptomatic, Petsas said. A further 160 people, mainly police and administrative staff who had come into contact with the migrants were tested, and all were negative for the virus.

Petsas said the positive cases from Lesbos would be added to Greece’s official coronavirus figures on Monday. Health authorities release daily statistics of the virus’s spread every evening.