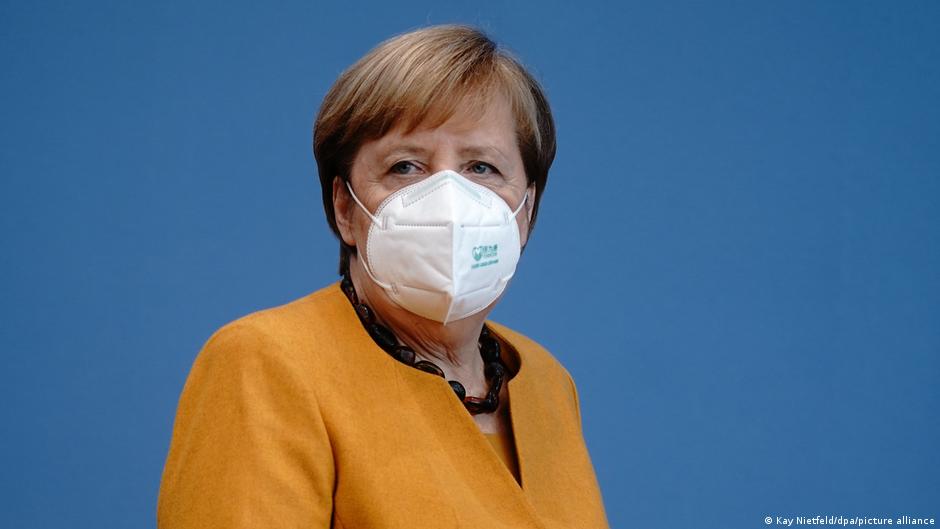 German Chancellor Angela Merkel said on Tuesday she would have preferred to implement stricter lockdown measures proposed by her federal government after talks with state leaders on Monday. The discussions ended in agreement that the issue would be revisited in one week’s time, with no interim changes. Merkel said that she was very worried about the spread of coronavirus in some places, including Berlin.

« I do regret that things sometimes move a little too slowly, » Merkel said at a business symposium organized by the Süddeutsche Zeitung newspaper.

Governments should react with the same urgency to climate change as to the pandemic, the Red Cross (IFRC) warned. « It’s a very, very serious crisis the world is facing currently, » said IFRC Secretary-General Jagan Chapagain.

However, « climate change will have a more significant medium and long-term impact on the human life and on Earth … Unfortunately, there is no vaccine for climate change, » he said.

Austria has started a strict new lockdown. From Tuesday, people are only allowed to leave their homes to purchase groceries, to go to jobs deemed essential, to exercise or to help people who need assistance. All restaurants, shops, hair salons and other services have been ordered closed. The small Alpine nation has reported nearly 47,000 new cases over the last seven days.

French Health Minister Olivier Veran said he could not give a date for the end of the nationwide lockdown. Wide-ranging restrictions were imposed on October 30, initially for one month. Veran added that travel restrictions would not be lifted on December 1.

French health officials are also aiming to kick off a nationwide vaccination campaign in January, when it hopes the jabs for the virus will be approved. « We’re preparing a vaccination campaign to be ready the moment that a vaccine is approved by European and national health authorities so we can launch a vaccine immediately, » government spokesman Gabriel Attal told France 2 television.

The French government also said that football fans will not be able to return to stadiums until next year. President Emmanuel Macron told sports officials a return of spectators « is not possible in December » due to a recent surge in coronavirus cases.

British airline easyJet has posted its first full-year loss in its 25-year history, as a result of the coronavirus pandemic. The airline reported Tuesday a pre-tax loss of £1.27 billion (€1.4 billion) ($1.7 billion) for the year through September as passenger numbers halved to just 48.1 million, while the summer saw the airline flying with just 38% of its planned capacity.

Russian health authorities reported that a new mutation of the virus appears to be emerging in Siberia. « We are seeing certain changes in the protein, » said Anna Popova, head of the federal health and consumer rights watchdog Rospotrebnadzor. « These substitutions identified in Siberia allow us to assume that this region is forming its own variant with certain mutations, » said Popova.

A football match between Switzerland and Ukraine has been called off after three Ukrainian players tested positive for COVID-19. The country’s football association confirmed that the entire squad has been placed in quarantine. The two nations were set to face off in the final round of the Nations League.

India registered 29,613 new infections over 24 hours, the lowest daily increase in four months, according to the country’s health ministry. The nationwide total caseload stands at nearly 9 million, second only to the United States.

South Korea is tightening social distancing rules in Seoul and some parts of eastern Gangwon province amid a coronavirus resurgence there. The announcement came as the country, which wasone of the first to effectively curb the spread of the virus, saw daily infections stay above 200 for four consecutive days.

Australian authorities started conducting mass tests, while around 4,000 people were confined to quarantine, in an effort to curb a new surge in the virus. Australia has recorded nearly 28,000 infections and 906 deaths since the start of the pandemic.

United States President-elect Joe Biden warned that « more people may die if we don’t coordinate » a response to the pandemic.

Biden was addressing President Donald Trump’s refusal to acknowledge the election results and cooperate with his transition team, saying that this could hamper his ability to hit the ground running after his inauguration in January. The US has recorded over 11.2 million cases and more than 247,000 deaths since the start of the pandemic.